What is Retinitis Pigmentosa?

Retinitis pigmentosa is a chronic, hereditary eye disease characterized by black pigmentation and gradual degeneration of the retina. 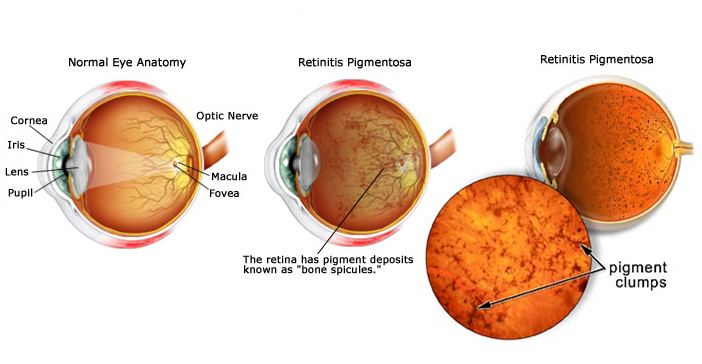 The retina lines the interior surface of the back of the eye. The retina is made up of several layers. One layer contains two types of photoreceptor cells referred to as the rods and cones. The cones are responsible for sharp, central vision and color vision and are primarily located in a small area of the retina called the fovea. The area surrounding the fovea contains the rods, which are necessary for peripheral vision and night vision. The number of rods increases in the periphery. The rod and cone photoreceptors convert light into electrical impulses and send the message to the brain via the optic nerve. Another layer of the retina is called the retinal pigmented epithelium (RPE).

In retinitis pigmentosa, the photoreceptors (primarily the rods) begin to deteriorate and lose their ability to function. Because the rods are primarily affected, it becomes harder to see in dim light, thus causing a loss of night vision. As the condition worsens, peripheral vision disappears, which results in tunnel vision. The ability to see color is eventually lost. In the late stages of the disease, there is only a small area of central vision remaining. Ultimately, this too is lost.

There are many forms of retinitis pigmentosa. Sometimes the disorder is classified by the age of onset or the inheritance pattern.

While there is currently no cure for retinitis pigmentosa, researchers are looking into a range of treatment options, such as stem cells, medications, gene therapy and transplants. Supplements may slow the disease. Research has shown some promise with a combination of vitamin A, lutein and oily fish high in the omega-3 fatty acid DHA. If you have retinitis pigmentosa there are some devices that can help make objects look brighter and larger, such as low-vision magnifiers. These devices can help you remain independent and active.

It is important to see an eye doctor regularly. Our doctors in Phoenix is able to diagnose and treat many vision problems including diseases such as retinitis pigmentosa. To schedule your eye exam, contact Associated Retina Consultants at 602-242-4928 or website today.